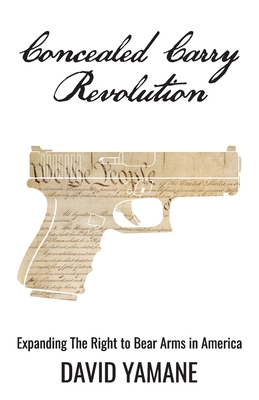 This is an excellent book presented in a way that is well suited to the current, unfortunate devolution in the human attention span. It is brief, simple, and should be in the library of any gun owner who seeks to understand or legitimize firearms ownership as a phenomenon.

David’s writing has a direct, obvious, clear quality. It is very easy to learn from his delivery. I am fully baited and looking forward to his completed book on Gun Culture 2.0. The future of guns needs as much output from David’s voice as possible.

You can purchase the book by clicking here.

You can support David’s research by donating to him here.

Finalizing a book chapter at a hotel in Washington, DC, November 2021.

David’s Summary of the Work:

“Restrictions on carrying firearms in the 19th century were widespread, even in places we associate with a strong gun culture. Especially in those places in fact…significant restrictions on carrying concealed weapons beginning in the American South in the early 1800s spread throughout the country and remained in place well into the 20th century” (p. 10).

There are myths associated with America’s frontier-reality and with “The Wild West.” While it is popular to romanticize the existing freedoms associated with seminal rural experiences, these freedoms are not the only significant component of the past reality. American frontier towns often had strict regulations as it pertained to firearms (p. 5).

A strong example of this early reality can be seen in 1881. Dodge City’s Ordinance No. 9,  also known as “Earp’s Ordinance”, dealt with the prohibition of carrying all deadly weapons, including: all firearms of every description, Bowie knives and dirks.

Permissions for carry could be given with a written permit. The ordinance also operated with a good faith buffer upon entering or leaving the town – for checking-in or checking-out your weapons (p. 6).

The reality of the historic, gun restriction trend in America is actually one of liberalization. When gun restrictions existed in the American past, they were generally much more strict. This runs opposite to many beliefs in the current era about American gun laws. In the current reality, there certainly has been a pattern of “liberalization of carry laws” and “favorable court rulings” from the 1970s until the present (p. 10) .

The development of laws pertaining to guns found its roots with the effects that The Natural Law Tradition had on the minds of the European enlightenment. This honoring of pre-societal rights certainly found its way into the early body of English law. “William Blackstone’s ‘Commentaries on the Laws of England’ identified ‘having and using arms for self-preservation and defense’ as the fifth auxiliary right of British subjects (auxiliary to natural rights of personal security, personal liberty, and private property)” (p. 13)  .

While it is important to highlight the presence of early restrictions, gun ownership was very much-so the norm for colonial men, many male children, and some women (p. 14).

In the 19th Century, the seeds for modern concealed carry restrictions were sewn in The American South, primarily. It is of importance to note that Historian Clayton Cramer has analyzed the presence of these early laws of prohibition and has concluded that these laws manifested in mostly Southern States as a reaction to the Southern culture of backcountry violence. (p. 16)

In 1813 The Commonwealth of Kentucky passed the country’s first full prohibition of concealed carry for weaponry. Through the course of subsequent activity in the courts, Kentucky ended up amending its state constitution to reflect this prohibition.  This amendment allowed Kentucky to hold its original ban in place for approximately 150 years. Subsequent to the establishment of this ban, Louisiana, Indiana, Georgia, Arkansas, Tennessee and Virginia all passed laws to prohibit the carry of concealed weaponry (pp. 15-16).

This was the era of weapons-concealment-as-devil.

By the middle of the 19th century open carry was seen as acceptable. Concealed carry of a firearm was seen as devious. In 1850 the Louisiana Supreme Court posited the idea that open carry was a “right guarantee by the Constitution of the United States, and which is calculated to incite men to a manly and noble defense of themselves, if necessary, and of their country, without any tendency to secret advantages and unmanly assassinations” (pp. 17-18).

While the 19th century was indeed a time of gun-prohibitions it was simultaneously a time of people not following the vectors of prohibition and engaging in vigorous gun carrying (p. 18).

In the final analysis of the seminal era of concealed carry restrictions:

2.Those restrictions began in The American South.

3.Those restrictions served as the template for subsequent carry laws.

As history moves from the late 19th Century to the early 20th century, concealed carry was not “a major social or political issue” in American society’s burgeoning urban development (p. 21). As a matter of fact, citizens carrying guns in the urban reality was often seen as out-of-step – much as it is today by many people.

The restrictions upon concealed carry throughout the 19th Century lead to development of a fundamental permitting concept which feeds our current-day permitting reality. This system bestows judges, sheriffs, and police chiefs with the legal power to grant concealed carry permits. Earlier iterations of these systems often included vetting based upon concepts like “good moral character” and “proper cause” (pp. 22-23).

In the 1920s and 30s a number of states adopted the “Uniform Act to Regulate the Sale and Possession of Firearms.” This carry permit law was an attempt to deflect the more stringent effects of existing laws which required permits to merely own a firearm. In the LGO501c4 reality we would put this regulation in The Class of Improvement.

Much like we see in the current reality, the early 20th century showed a split between the sports-people / hobbyists and the more comprehensive self-defense gunners. “Traditional gun culture saw no problem with outlawing concealed carry as long as the interests of target shooters, sportsmen, and ‘reputable’ members of the public who wanted guns or home or self defense were preserved, all was good” (p. 24).

In the early 20th Century, “where government authorities allowed concealed carry at all, it was under a discretionary system” (p. 25). It needs to be noted that may issue permitting systems have often served to arm the rich and famous with the issuing entity being one of substantial clout in the associated community (pp. 26-27).

These foundational permitting approaches continued to stand on the two fundamental components of good character and need, and they often added requirements like posting your request for a permit in the local newspaper or getting the signatures of five other people to vouch for you. In addition, contemporary shall issue systems have evolved  “no cause is a good cause” or “heightened good cause”  mesh – essentially de facto no-issue practices that are the legacy of the earliest gun laws, seeded in The American South (p. 29).

From the 1930s until the 1980s strict state regulation of concealed carry was normal in most of The United States (p. 31).

Chapter 3: The Rise of Shall Issue Concealed Carry

By the 1980s major changes were taking place in the gun community and the concealed carry movement was gaining steam. This vector started as a reaction to The 1968 Gun Control Act and this reaction sparked the contemporary manifestation of the gun rights movement. At the 1977 NRA annual meeting in Cincinnati, the hardline self-defense-focused members wrestled control from the outdoors and sporting people. Reaction to the dramatic rise in violence in the 1960s also contributed towards this vector of power for those interested in armed self-defense (p. 36).

Chapter 4: The Shall Issue Devil Is in The Details

Concealed carry permits do not allow people to carry any weapons-type in any fashion that they choose. There can be a range of requirements to obtain a concealed permit. Sometimes, the direct requirements or the background check requirements can cause a rejection to the application. Standard requirements can include age, past convictions, mental health status, marijuana usage, and your status as a citizen. In Illinois, you cannot have been in drug or alcohol rehabilitation in the past 5 years (p. 42).

Moreover, all states limit where weapons can be carried (pp. 45-46). Some examples of prohibited areas may include:

Some states require a basic display of proficiency/training and/or classroom learning. These requirements can be particularly contentious for many who see firearms ownership as a fundamental right (pp. 48-49).

Another common restriction for concealed carry licensure is related to drug and alcohol consumption. In some states you can consume some alcohol and still carry, in other states you cannot consume any.

“Shall issue concealed carry represents a liberalization of American gun laws, but within that broad movement, some states are more liberal than others” (p. 47).

In The Trace, researcher Jennifer Mascia (an ideologically bombastic, pro-public-safety advocate) analyzed training requirements in all of the 50 states. The results indicated that 26 states have a live-fire requirement and 25 do not.

There is an obvious range of opinions between public safety activists and those that believe in constitutional carry as it pertains to carry permit requirements. There is also a range of differing opinions among just gun owners.

It is also important to highlight that the training associated with obtaining permits is not the same as true competency training. As Arkansas gun trainer Rob Jenkins points out, “concealed carry is a licensing class, not a training class…If gun training is a ladder, a concealed carry course is just walking up to the ladder” (pp. 59-60).

John Johnston from Citizens Defense Research brings up the point that real self-defense training takes much more than an 8 hour class. He is actually open to the idea of state-funded training. But the money and logistics required to actually get gun owners on the road to proficiency would be too much for states to handle properly (pp. 60-61).

Training requirements can also equal large financial requirements and this can have intended or unintended consequences upon new gun owners by creating a barrier to ownership. This effect can discriminate against those who may be socioeconomically disadvantaged (p. 61).

Ultimately, there exists no evidence which shows that states with training requirements have higher incidences of firearms related injury and death (pp. 67-68).

Since 2013, a number of states have actually reduced their training requirements significantly. This is indicative of the continuing liberalization of concealed carry laws (p. 68).

The concealed carry phenomenon is stronger in America than it has ever been. The general tendency in concealed carry laws is one of liberalization. There is now a culture of very strong gun rights activists and concealed carry is connected to that activism (pp. 72-73).