This blog post is going to focus on wrapping-up this first series of four podcasts, L1-L4, which deal with the LGO Lens Anthro Pillar and the core tenets of Curtis Marean’s Hypothesis.

Episode L1 gave us the anthropologic basis for the universality and continuity of the relationship between humans and weapons. Episodes L2-L4 cover the heart of the concepts related to Curtis Marean’s Hypothesis – the beginning point for modern human cognitive capacity, and its effect on our species-specific transition out of the realm of all other mammalian fauna.   We are the only mammals who have footprints on the moon and there are different versions of reasoning for this.   Marean’s reasoning is one version…and it is the reasoning that LGO501c4 is embracing in our work.

It is important to note that, at one point, we were a species fully subjected to the prime, natural pressures of most all animals on the planet. We were likely preyed upon, relentlessly, like many other animals.   At some point, this basic dynamic stopped. In many ways we moved onto the other side of the low Malthusian ceiling of primitive survival, became entirely unique, and went on to successfully migrate from Africa and to dominate the planet.

The question about how this occurred is commonly referred to as “The Human Uniqueness Problem.” At one point, we were a species getting our asses handed to us and then at some point, later on, we became the masters of the planet. How did this happen?   Well, Curtis Marean’s Hypothesis gives us an anchoring point to answer this question. It is located in Chapter 6 of The Anthro Pillar. 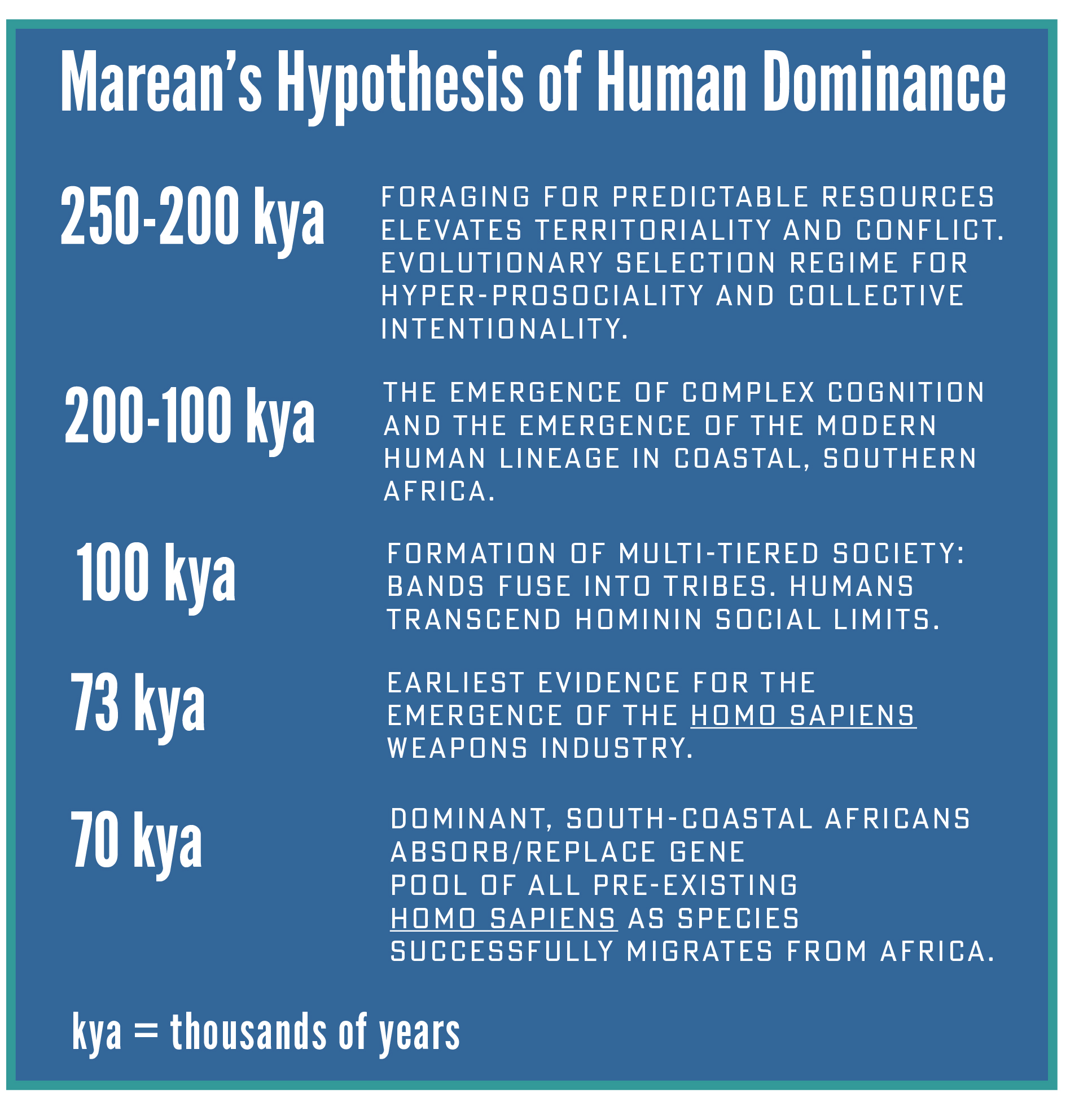 Between 250-200 kya, small groups of coastal-foraging African Homo sapiens are driven by their desire for consistent food. There is competition for this food. The most successful groups are the ones that are able to do the following two things:

2. To band together with other bands in order to heighten the success of the foraging operations. Those humans that have the emotional capacity to band together in this fashion will be able to out-compete those who do not. It is believed that humans, prior to this, were generally not capable of this kind of extensive social behavior. If they were, there were no significant natural selection pressures pushing the human genetic reality in this direction. 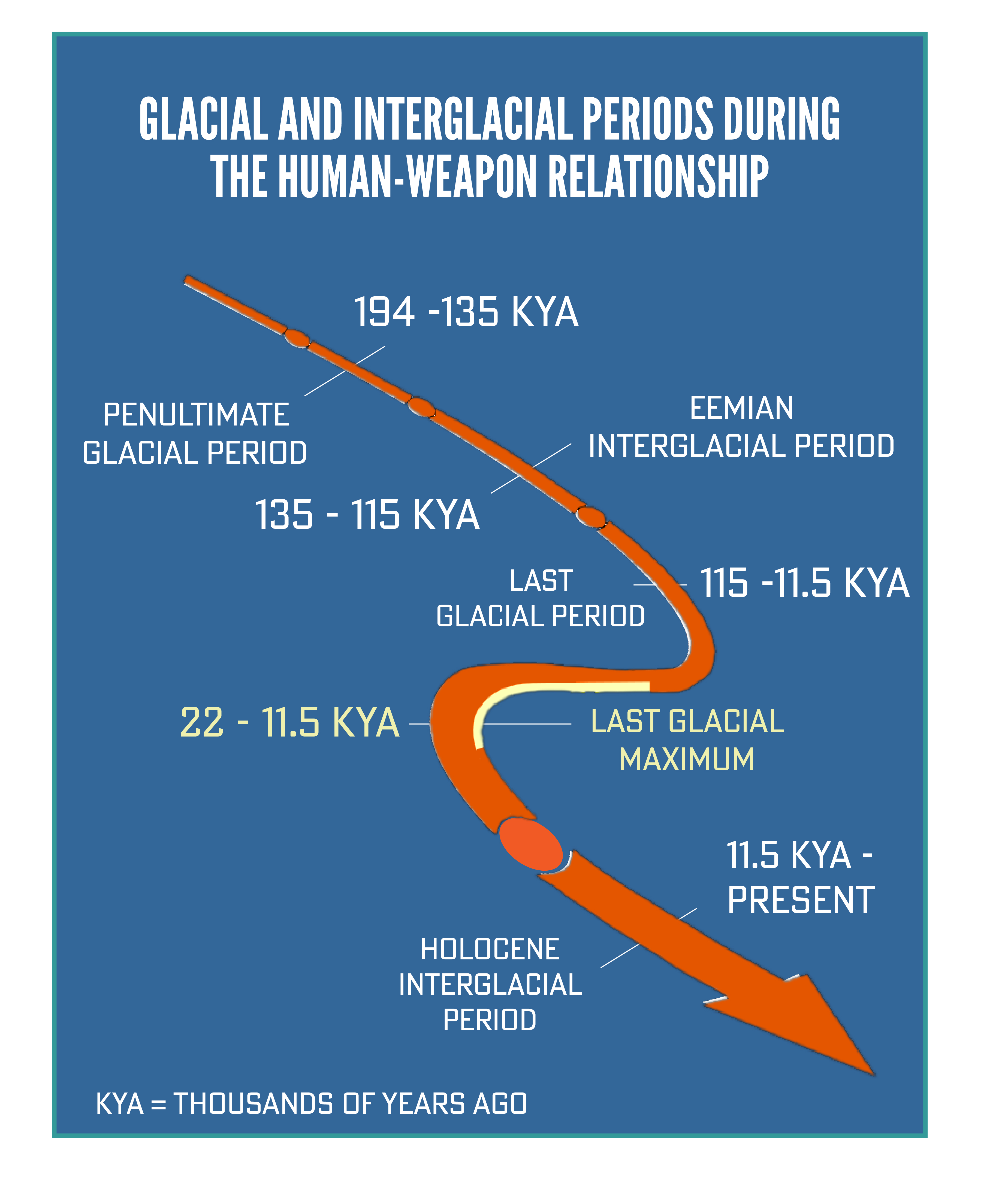 Around 194 kya a glacial phase begins on earth. This makes much of Africa uninhabitable. The coast of Southern Africa is one of the few areas which is inhabitable and the pre-existing coastal resource competition game is intensified by the fact that the area is now cut-off by the effects of the climate. These early humans are unable to leave for about 60 kya. The number of humans inside of this dynamic is relatively small.

This sets up what is called a “Natural Selection Regime” for those humans who are able to reach advanced cognition and advanced social capacity. Those who do not posess these capacities either die, are killed, or are absorbed into the gene pool of the advanced group.

As a result of this regime, complex cognition and hyper-prosociality emerge as a human gene-culture baseline. These abilities place humans above all other hominins on the planet and above any other surviving groups of Homo sapiens in terms of survival sophistication. This advanced group of Homo sapiens are likely the progenitor population for modern humans.

Around 135 kya the glacial period relents and this advanced brand of Homo sapiens is able to move around African again – absorbing and replacing the small, surviving pockets of more simple Homo sapiens that it intersects with. This happens in Africa for another approximate period of 60 kya until the first successful migration out of the continent – around 70 kya.   So, in terms of The Human Uniqueness Problem, we have some answers that we can begin to stand on.

How did humans go from being an entity like other animals to the dominant force on the planet?   The question begins to be addressed by advanced cognition, hyper-prosocial behavior, and a Natural Selection Regime created by the climate – all occurring with a small, isolated group of Homo sapiens on the coast of South Africa.   However, there is one more component that requires serious consideration:

We have the earliest evidence for advanced, multi-component projectile tips occurring in Pinnacle Point, on the coast of South Africa, and this evidence is dated at ~70 kya. It is highly likely that we are not looking at the first ever products of this projectile industry. So, the industry that produces such technology is likely to be older.

Early advanced projectiles would have played a role as an intensifier to either the aforementioned Natural Selection Regime or the subsequent migration through and out of the African continent. This makes advanced projectiles and The Homo Sapien Weapons Industry another potential part of the explanation for The Human Uniqueness Problem.   We can include advanced projectile production, alongside advanced cognition and hyper-prosocial behavior, as a significant consideration for humans escaping the low-ceiling placed upon us, by nature, during our earliest phase. We certainly can consider advanced projectiles as a significant element for our successful migration from Africa.   This places the relationship between humans and weapons, and specifically humans and their anthropologic projectile industry, as something significant in the understanding of the total human reality.

Once we reach 20-25 kya there are microlithic bladelets and bifacial dart and spear tips found by the scores – the entirety of the archeological record showing their continuing existence, by the hundreds-of-thousands, all over the world. From 25 kya onward this same intense presence of projectile creation, maintenance, and improvement has not ceased for the human species. Whether or not the earliest industry continued in an unbroken line or died-out and was reinvented at different points is immaterial to the general continuity of The Human-Weapon Relationship and our intense dedication to projectile production and advancement.

Sociologist David Yamane once asked: “Hey, guns! What’s up with that?”

The Homo Sapien Weapons Industry. That’s what’s up with that.